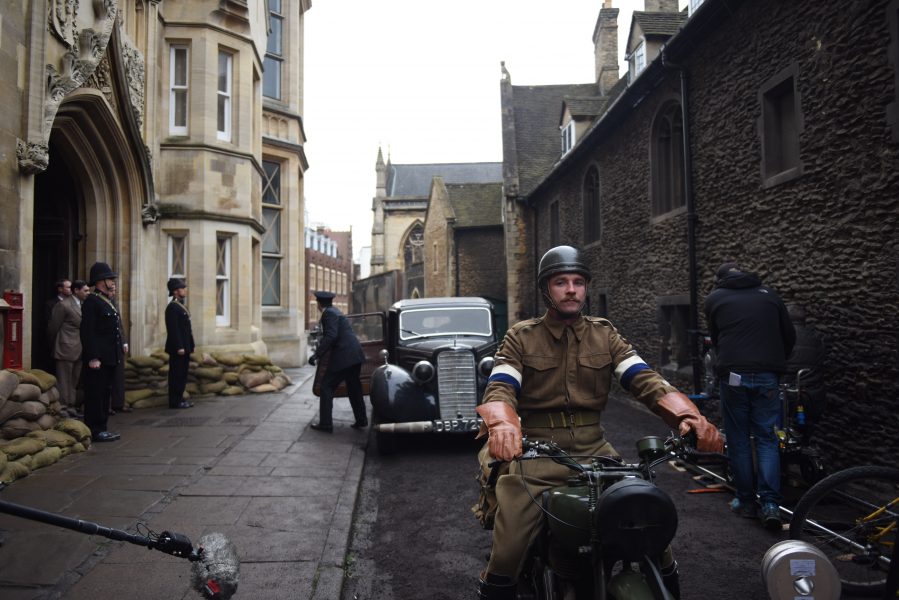 As the film adaptation of Jennie Rooney’s novel Red Joan (directed by Trevor Nunn) opens across the UK this weekend, the blog has an exclusive behind-the-scenes tour with talented set decorator Tanya Bowd. The blog gets the low-down on the locations, where the film props were sourced and how the set team did a crash course in nuclear physics. All in a day’s work for Tanya who has worked her magic on many top film and TV series including The Crimson Field, Victoria, Howards End and more recently for The New Pope starring Jude Law. 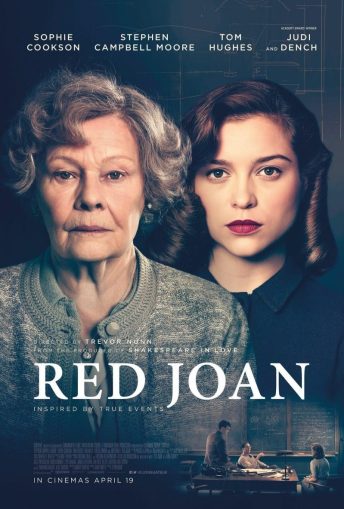 The plot is inspired by true events

I can’t wait to see the film with its intriguing cold war story based on true events. Rather promisingly, Red Joan is from the same producer of Shakespeare in Love, a film firmly filed under the category of ‘great costumes, sets and art direction’ in the blog vaults. I am particularly looking forward to seeing the scene in the year 2000 when Red Joan (played by Judi Dench) is discovered as an old lady by MI5 living unassumingly in a 1930s Kent suburban house…

Here is the plot courtesy of IMDb:

“English-born Joan Stanley, a Soviet and communist party sympathizer, becomes employed as a British government civil servant, and gets recruited by the KGB in the mid-1930s. She successfully transfers nuclear bomb secrets to the Soviet Union (Russia), which enables them to keep up with the west in the development of atomic weapons, and remains undetected as a spy for over a half a century.”

What is a set decorator’s role in film?

Before we get into the nitty gritty of Red Joan sets, Tanya puts the record straight for me on what the role of set decorator entails and what her qualifications are:

Tanya says that “Wikipedia’s entry is a correct description of a set decorator’s role, however it is written from an American point of view, so for example, action props are the domain of the set decorating team in the UK and not the prop masters. Also, the set decorator is usually employed by the production designer not the producer, although I find it is often the producer or line producer that recommends me.”

What qualifications do you need to be a set decorator?

Tanya studied theatre design and has worked across theatre, opera, film and television. “I worked my way up from art department assistant to assistant production buyer, production buyer to set decorator. This was over a period of many years and is essential experience for being a head of department.” Tanya says that set decorators need to be very good with budgets as well as having a meticulous eye, and an extensive knowledge of decorative arts and design history. “The latter I studied at University and add to with frequent visits to exhibitions and historic houses.”

Cristina Casali was the production designer on Red Joan who hired Tanya to set decorate the project, the pair had worked together before on The Crimson Field. Tanya says that period productions aside, she likes to work on a wide range of projects, including contemporary or fantasy. The key element being an interesting story. “I like creating make-believe worlds and working on what I would like to watch. European dramas and films, or World cinema. By European I also mean the UK!”

Cristina’s design brief was for the UK sets to have darker colours for the 30s and 40s, tonally lighter in shade for the year 2000 and for the scenes in Canada to be brighter and whiter. “I found a painting by the second world war artist Evelyn Dunbar, her palette of colours were similar in tone to Cristina’s reference.”

Once the project was ‘greenlit’ the team had four weeks’ prep time before a seven-week shoot schedule. “I had an assistant buyer, an assistant set decorator and buyer in my team. With multiple period sets in two timelines (2000 with flashbacks to the 30s and 40s) filmed in several locations we had to hit the ground running!” says Tanya.

The art department and set decorating departments had a crash course in nuclear physics. “We pulled in resources and contacts and together began to map out what the sets would look like for both the UK (Tube Alloys) and Canadian atomic research labs in the 30s and 40s. We liaised with a scientist in New York to check we were on track with the authenticity of the laboratories and equipment” says Tanya.

Tanya’s favourite location was a grand old Victorian house in Highgate that lent itself to Leo and Joan’s various bedsits, college rooms and Joan’s first flat as a working woman. “Completely empty, we painted, wallpapered and added layers of characterisation through textiles, objects, art, graphics and furniture.”

Other locations included Chatham docks, a disused hospital wing in Ilford, Essex to recreate the interiors for Tube Alloys, Surrey for Joan’s Kent suburban house in 2000, and a former aircraft testing facility which became the labs in Canada. As well as to Hemel Hempstead, Hertfordshire for the cafe and lingerie shop.

“As the filming period was only over seven weeks, I tended to hire a lot of the props, being short-term rental, also a lot of the scientific props would have been very expensive to buy! Where I could, I purchased items for the domestic interiors, be it textiles or the odd bit of furniture. The prop houses are great for the selection of furniture on offer, but I do start to recognise pieces on film and television! I like to source from markets and auction houses also and what we couldn’t hire or purchase, we would make.”

“The tearoom set was an empty shop in Hemel Hempstead. Luckily, an antique shop was a few doors down and benefitted from a last-minute request for more objects.”

“We had to create street scenes during the blackout period of WW2, so we researched what this would have entailed. We discovered that anything that a person could have walked into during blackout would have been painted with white lines for ease of sight. We used tape for quick removal. Windows were taped in a crisscross pattern to protect people from being injured from flying glass during an air raid. The prop master employs set dressers to assist my team and we all set to, taping so many windows!” says Tanya.

I may have mentioned it before but I have this rather film geeky thing where I scan a film firstly for set design, secondly for any wallpapers I might recognise (strange I know…) and thirdly for the plot. This is ‘Standen‘ a William Morris wallpaper (available at The Style Library) that Tanya and her team chose for young Joan’s bedroom at Cambridge. For other Red Joan sets, the team used textured anaglypta and striped wallpapers.

The book is available through independent book shops as well as from Amazon. 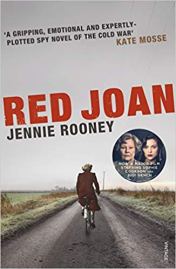 Thank you so much to Tanya Bowd for her behind the scenes tour of Red Joan, to Trade Mark Films for permission to use their photography by Nick Wall and to you for reading! I am definitely off to the cinema to see it this weekend.

If you have enjoyed this post and would like to receive email alerts for future posts, then please just press the large blue ‘follow’ button either at the beginning or end of a post. With many thanks Charis x

10 thoughts on “Red Joan – behind the scenes”

Back by popular demand are some pics on my Stories of what's coming up for sale @lotsroadauctions 28th Nov and 5th December ... ! ❤😉
Some lovely corded embroidery as seen at #ldw22atdcch press show today 🧡🧡🧡
It was lovely to see @rebeccasnowgleeson and @arabellamcnie at the #ldw22atdcch press launch today.
Thank you to @modern.makers.uk for such a beautifully curated selection of work on show today until 4pm at Yattendon village hall in Berkshire, RG18 0UE. Lots of special gift/interiors ideas including this magical model theatre scene of Polo at Englefield Hall by @annepaytonartist 🎭🐎
A Russian Style blog post has been in draft for a little while but when I heard about The V&A exhibition 'Faberge in London: Romance to Revolution exhibition which opens tomorrow I couldn't resist the Russian story any longer.
Beautiful weather in London today!
Follow Charis White Interiors on WordPress.com