Beach-style interiors is a trend that surfaces each Spring pretty much without fail. I must admit to being one of the many willing ‘goldfish’ who forget from one year to the next that its jaunty style isn’t actually anything new.

It cunningly arrives at the end of winter after weeks of light deprivation. Just at this low point it takes your breath away with the shear audacity of its fresh navy and white promise of coastal beach houses, summer holidays and sparkling turquoise seas. Designers of these collections take inspiration from holiday houses to hotels, literature, film and TV.

Inspiration for beach style is to be found in hotels up and down the UK coast. These hotels are the stuff of storybooks. The Victorians and Edwardians built them in the best coastal locations. Perching cliff side they were also sometimes complete with a magical staircase which took you down from an oak-panelled dining room to the garden and on to the beach below. They don’t always have their original panelling but these hotels are still in the same location, and now might have a spa with more contemporary interiors.

A really well interior designed ‘beach style’ hotel is The Tresanton in St Mawes in Cornwall. Its relaxed atmosphere manages to make you feel more like you are the guest of a private home. With the thoughtful light touch of a good hostess, the hotel has a small library of sea-themed novels from Daphne du Maurier’s Rebecca to Mary Wesley’s Camomile Lawn and Ian McEwan’s On Chesil Beach. Because of the hotel’s proximity to the sea, there is at least one bedroom where you can go to sleep to the soothing sound of the tide going in and out.

The 2003 US film with a very memorable beach house is ‘Something’s Gotta Give’ starring Jack Nicholson and Diane Keaton (check it out on my Coastal Living Pinterest board and see all the fans the house has 13 years later)! This was no salty beach hut; it was a smart holiday house to be found in either The Hamptons or on Cape Cod. The sort of house that would be owned by generations of a political dynasty. 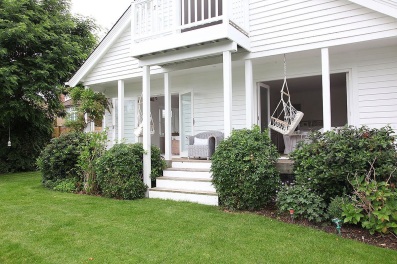 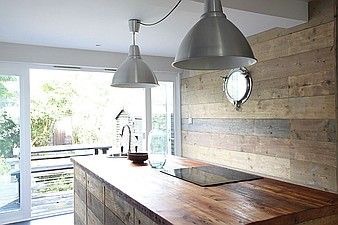 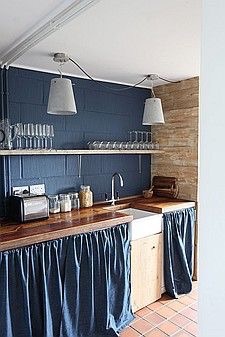 Notonthehighstreet.com. There is much to discover both on and off the high street. Indigo striped fabrics (Ian Mankin, William Yeoward), cushions with sea inspired prints (Notonthehighstreet.com). There are white towels with smart navy fabric trims (Zara Home), Turkish Hammam style towels (Notonthehighstreet), white waffle towels (The White Company) and crisp cotton bedlinen printed with shells (Joules) or with broad stripes and yachts (Seasalt). Seagull wallpapers, bedlinens and now window film designs including ‘Whitby’ and ‘Gulls’ from Mini Moderns. Chrome porthole mirrors, great for any room in the house can be found on Amazon. You can never have enough baskets for storage such as this cute (see my Coastal Living Pinterest board for all these things and more) Molly Meg one. Look out too for George at Home at Asda which has just brought out a nautical interiors collection, I particularly love their blue and white woven baskets and Nelson cushion.

I designed this Mothercare set with photographer Tim Burkitt (Basement Photographic Studios) using a Linwood wallpaper called ‘Finisterre’ Ref. LW032/001. The wallpaper has soft line drawings of great sailing ships and schooners. Although it wasn’t a children’s design, I thought it worked really well as decoration that could move from a baby’s room to a toddler’s room and beyond.

It sat over a half timbered whitewashed panelled wall. The return wall had a useful deep window seat for the model (a very giggly little boy) which created a feature that you might find in a Cornish fisherman’s cottage and a great place for reading storybooks. For a spot of authenticity and depth to the shot, we included a beamed ceiling.

Photographic location houses are another good place for Beach House inspiration, such as this one by interior designer Francesca Rowan Plowden whose house is available for shoots through Light Locations. This image of an attic bedroom on the Sussex coast shows how using a recycled inexpensive material such as scaffolding boards creates the cosy look of a fisherman’s well insulated cottage.

Practically speaking, no beach house needs carpet. I really like this painted staircase also from the location house which shows how effectively a lick of paint in bold navy can create a striking look for a hall. Another great nautical staircase idea is the Pinterest image, of a white painted staircase with three central stripes in navy (rather like a French grain sack design).

The Coastal Collection from SS13 which I styled on behalf of Laura Ashley shows how you can mix plains and prints together within a similar colour palette. The chimney breast was wallpapered in a stripe which reflected the stripe on the sofa. Cushions with checks, botanical prints and appliqued patterns gave extra detail to the scheme. This was a more formal setting so styling with symmetry by way of two lamps on the sideboard and hanging one print over another gave the room a smarter look.

Whenever I am styling shots, I always like to use as many natural elements as possible. This stops the eye from seeing too many hard edges and brings a freshness to an image.

For international coastal inspired interiors and architecture, Ryland Peters and Small are publishing a coffee table book by Henrietta Heald in March 2016 called Coastal Living, A Celebration of Living by the Ocean. £25

In no particular order, for location, sand and sea, these beaches are always worth the journey:

If you have enjoyed reading this post and would like to receive further email alerts for future posts, please press the blue ‘Follow’ button.  Thank you so much for reading!

In 2023 'snug' isn't just a cosy feeling, it's a room that has risen to the top of interior design wish lists.
Ice patterns
Winter veg by @madebylottieday @topdrawerlondon today
Happy Weekend 🌿😘!
A very Happy New Year to you! 🌟
Follow Charis White Interiors on WordPress.com