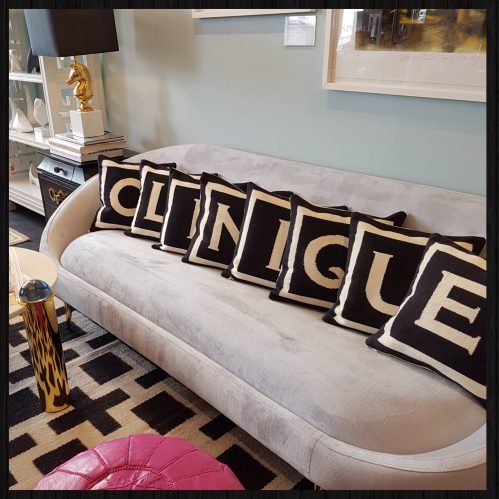 Seventies glam interior style or as Jonathan Adler calls it – Modern American Glamour – is something I know a little bit about. I grew up in Elstree, Hertfordshire which has one of the UK’s largest film studios. The leafier lanes of Elstree village were also home to celebrities such as Simon Cowell, Pete King (business partner of Ronnie Scott’s jazz club), Joan Collins and other visiting stars who were filming at the studios.

Private swimming pools were commonplace (upliftingly turquoise in colour – but often icily unheated!) Clearly there are no Hollywood hills in this part of Hertfordshire, but there were one or two Art Deco Hollywood-style mansions with views across North London green belt … TV cult series The Saint and The Avengers were filmed around the country roads of my brother’s school. Sometimes, rather incongruously, full scale outdoor sets of castles and forts jostled with factories amongst the industrial estates of Borehamwood. Directors such as Alfred Hitchcock, Stanley Kubrick and George Lucas made some of their most iconic films there as did many more. These days, the studios are better known for TV series East Enders, Strictly Come Dancing and Big Brother.

Elstree is no Hollywood

As a family we grew up seeing some pretty glamorous homes many of which could easily have inspired US designer and ceramicist Jonathan Adler – if he had been living here. Elstree is no Hollywood but in the the 60s and 70s it was punching way above its weight decoratively speaking – living its own mini tinseltown dream.

I therefore cannot resist the energy of Jonathan’s evocative designs which simply celebrate, the bright colour, pattern and glamour of 70s design (also because I am the proud owner of one his vases I bought a few years ago from Heal’s). His quirky designs bring a smile to my face and he nearly always manages to make kitsch look glamorous. 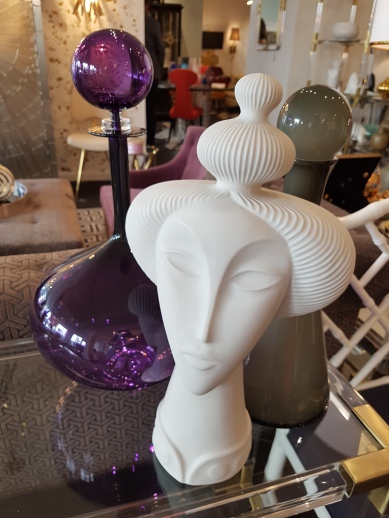 Jonathan Adler interior style is optimistic and bright.  It imports from around the world the sunshine and glamour of 1960s newly found holiday destinations. (Palm Beach, Capri and Santorini are some of Jonathan’s favourites which he has used to name some of his new products). Fashion designers Dolce & Gabbana or Gucci might have made a more obvious partnership but rather excitingly Jonathan has collaborated with beauty house Clinique for his next venture.

I am no beauty expert but even I can see the colours for the new Clinique + Jonathan Adler lipsticks – Adler Pops – and eyeshadows – Lid Pops – are ones I can’t wait to try. Rather pleasingly the packaging for the tops of the lipsticks are inspired by the lucite domes of some of his furniture and boxes.

Here are some images of Jonathan Adler style from the shop in Notting Hill and also from his 2017 UK Christmas press show (other images courtesy of Pinterest): 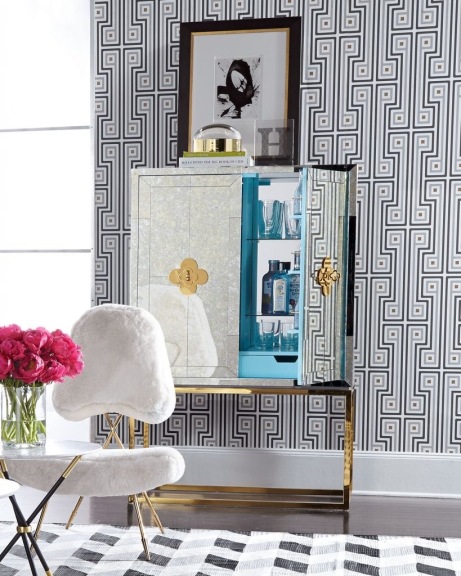 (image above: Jonathan Adler from enchantedhome.com/and below: Cocorepublic from Pinterest)

Jonathan says, “My collection for Clinique is for women who want to crank up their glamour factor to eleven.” I think I am more than a little comfortable with that concept …

For the full Modern American glamour experience either get along to Jonathan Adler stores in London’s Notting Hill or Sloane Street. The make-up range will be available nationwide from 18 August 2017. For a little more JA glamour check out Jumbo Tassels – a set piece for 2018.

Thank you so much for reading! If you would like to receive emails for future posts then please press the large blue ‘Follow’ button at either the beginning or end of this post. With best wishes, Charis X

5 thoughts on “Clinique at home with Jonathan Adler”